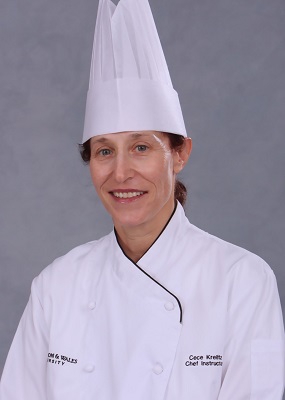 Cece Krelitz, a native of Minneapolis, Minnesota, received a bachelor’s degree in hotel administration from the University of Nevada, Las Vegas in 1985. In 1998, after working several years in the wholesale pharmaceutical industry, she earned an associate degree in occupational studies in culinary arts from the New England Culinary Institute in Burlington, Vermont. Krelitz has previously worked in the pastry departments of numerous restaurants and hotels throughout Las Vegas, including Wolfgang Puck Fine Dining Group, the Four Seasons Hotel, M Resort Spa Casino, and as part of the opening team for Le Cirque and Circo at the Bellagio Hotel and Casino. In 2010 she began teaching at Johnson & Wales University, Charlotte campus. In 2018 she earned a Masters of Entrepreneurship from Western Carolina University, in Cullowhee, North Carolina.

Solving the Mystery of Sugar Replacers