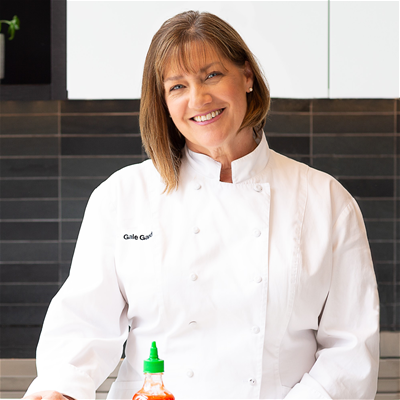 Gale Gand is a nationally acclaimed pastry chef, chef, cooking teacher, cookbook author, restaurateur, and television personality. She has received two James Beard Awards, and was inducted into the American Academy of Chefs and the Chicago Chefs Hall of Fame. She co-founded and partnered in the renowned Chicago restaurant TRU, which had 2 stars from the Michelin Guide.

For 8 years Gale was the host of Sweet Dreams, Food Network’s first program devoted to desserts, which is currently streaming on Discovery Plus. Gale continues to appear regularly on television, and has appeared on Top Chef, Iron Chef, Oprah, Martha Stewart, Rachel Ray show, and many others. Gale’s first national television appearance was with Julia Child, in the 1995 PBS series Baking With Julia. Gale is the author of 8 cookbooks, including her latest, Gale Gand’s Lunch!

Gale teaches cooking and baking at cooking schools across the country as well as virtually. Gale can often be seen cooking at food and wine festivals, on cruises, and at charity events around the world. She also is a partner with Think Jerky Company. Her artisanal soda pop, Gale’s Root Beer, has been sold nationally for over 20 years. She recently started Kitchen Sisters Cooking School, a virtual school, with Chef Jessica Dawson.

Gale began her career as a musician, then became a silversmith, with a BFA in metalsmithing from the Rochester Institute of Technology. She later attended the La Varenne cooking school in Paris. A wife and mother of three, in her spare time, Gale paints, takes care of her chickens, and plays the ukulele. Fun fact-She once made a Peach Cobbler for Aretha Franklin.

Yesterday’s Bread, Today’s Tartine: Turn One of the Most Perishable Products in Your Bakery into Profits

Yes You Canelé: Discover the Tricks of the Trade to Add Canelés to Your Bakery Menu

Demo: Modern Canelés: Learn the Art of Traditional Canelés with a Modern Twist